Shaw Media is an agile, industry-leading media company. An exciting mix of strengths, we are employee-oriented and – above all else – committed to our communities.

We are the proud owners of the third oldest, continuously owned, and operated family newspaper in the nation. Our legacy of success dates back to our founding in 1851. We’re the number one source of independent local news and information in the communities we serve, and one of the nation’s largest newspaper publishers. That success has been due to our talented group of employees who put their very best into Shaw Media’s award-winning daily and weekly print and digital publications located in Illinois and Iowa. And our history of success continues.

The pedigree of Shaw Media reads like a fascinating lesson in American history—involving documented Mayflower ancestry and government office in the Plymouth colonies; a daring, orphaned 14-year-old pony express rider turned printer/newspaper editor; the founding of the early Republican party; partnership with no less than Abraham Lincoln; and a determined businesswoman blazing professional trails in the early 1900s. It’s a story characterized by tenacity, drive, and vision—the same qualities that still define Shaw Media today.

The communities we cover make up a population of over three million people, and over one million households. We reach over two and a half million readers in print and online every month. We partner with thousands of small businesses, community non-profits, and municipalities to make our communities better places to live.

Taking the Legacy Into the Future

As Shaw Media and area businesses have evolved into the digital space over the years, the need for versatility became apparent and imperative. An always-expanding array of marketing and advertising solutions for our clients has been the result. In 2017, another step forward was taken with the launch of Shaw Media Marketing, which combines all of the elements and resources of the existing company to form a specialized, full-service marketing and advertising agency. The gamut of powerful digital and print tools at the disposal of the agency is geared to creatively and purposefully help our clients successfully market their businesses and grow their customer base.

Through the years, Shaw Media has worked with thousands of businesses in virtually every vertical on a multitude of projects, and as we continue to grow and build new digital audiences, you can rest assured that quality and history are on your side. 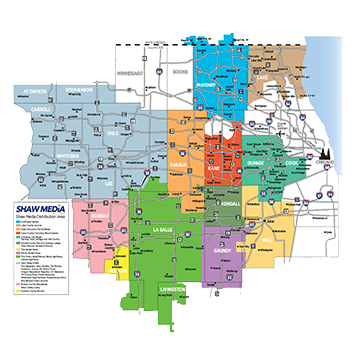